Package diseq is deprecated. Please use package markets instead.

The five models of the package are described by systems of simultaneous equations, with the equilibrium system being the only linear one, while the disequilibrium systems being non-linear. All models specify the demand and the supply side of the market by a linear (in parameters) equation. The remaining equations of each model, if any, further specify the market structure.

The equilibrium model adds the market-clearing condition to the demand and supply equations of the system. For the system to be identifiable, at least one variable in the demand side must not be present on the supply side and vice versa. This model assumes that the market observations always represent equilibrium points in which the demanded and supplied quantities are equal. The model can be estimated using two-stage least squares (Theil 1953) or full information maximum likelihood (Karapanagiotis, n.d.). Asymptotically, these methods are equivalent (Balestra and Varadharajan-Krishnakumar 1987). 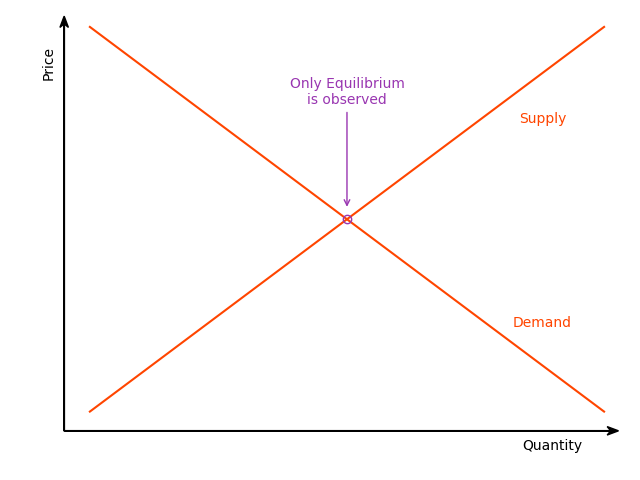 The basic model is the simplest disequilibrium model of the package as it basically imposes no assumption on the market structure regarding price movements (Fair and Jaffee 1972; Maddala and Nelson 1974). In contrast with the equilibrium model, the market-clearing condition is replaced by the short-side rule, which stipulates that the minimum between the demanded and supplied quantities is observed. The econometrician does not need to specify whether an observation belongs to the demand or the supply side since the estimation of the model will allocate the observations on the demand or supply side so that the likelihood is maximized. 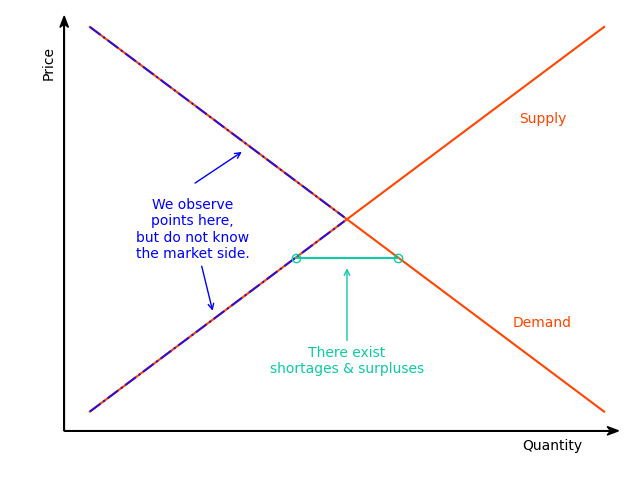 The directional model attaches an additional equation to the system of the basic model. The added equation is a sample separation condition based on the direction of the price movements (Fair and Jaffee 1972; Maddala and Nelson 1974). When prices increase at a given date, an observation is assumed to belong on the supply side. When prices fall, an observation is assumed to belong on the demand side. In short, this condition separates the sample before the estimation and uses this separation as additional information in the estimation procedure. Although, when appropriate, more information improves estimations, it also, when inaccurate, intensifies misspecification problems. Therefore, the additional structure of the directional model does not guarantee better estimates in comparison with the basic model. 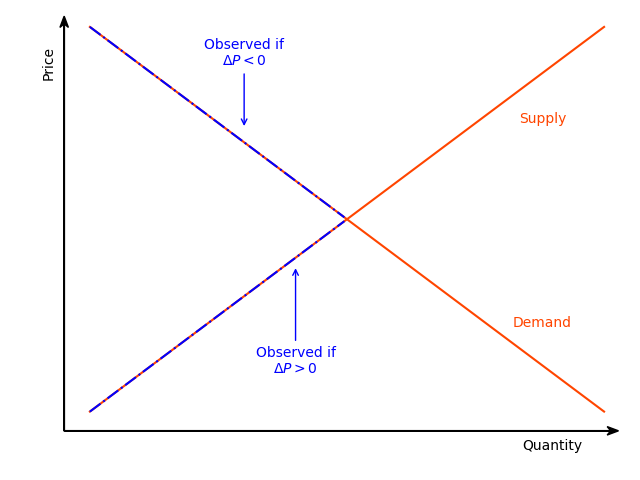 The separation rule of the directional model classifies observations on the demand or supply-side based in a binary fashion, which is not always flexible, as observations that correspond to large shortages/surpluses are treated the same with observations that correspond to small shortages/ surpluses. The deterministic adjustment model of the package replaces this binary separation rule with a quantitative one (Fair and Jaffee 1972; Maddala and Nelson 1974). The magnitude of the price movements is analogous to the magnitude of deviations from the market-clearing condition. This model offers a flexible estimation alternative, with one extra degree of freedom in the estimation of price dynamics, that accounts for market forces that are in alignment with standard economic reasoning. By letting γ approach zero, the equilibrium model can be obtained as a limiting case of this model. 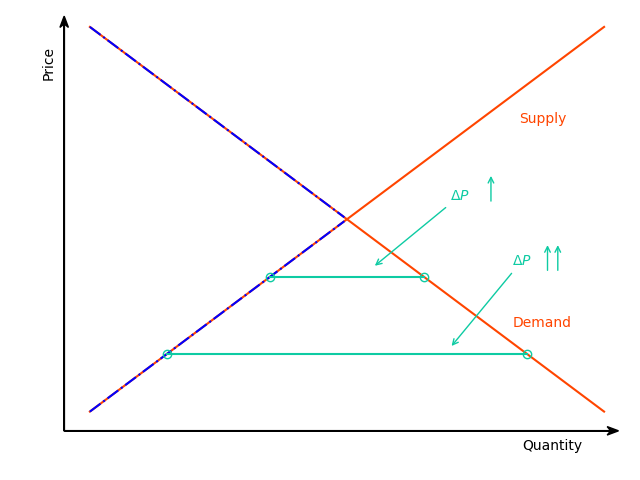 The last model of the package extends the price dynamics of the deterministic adjustment model by adding additional explanatory variables and a stochastic term. The latter term, in particular, makes the price adjustment mechanism stochastic and, deviating from the structural assumptions of models (DA) and (DM), abstains from imposing any separation assumption on the sample (Maddala and Nelson 1974; Quandt and Ramsey 1978). The estimation of this model offers the highest degree of freedom, accompanied, however, by a significant increase in estimation complexity, which can hinder the stability of the procedure and the numerical accuracy of the outcomes. 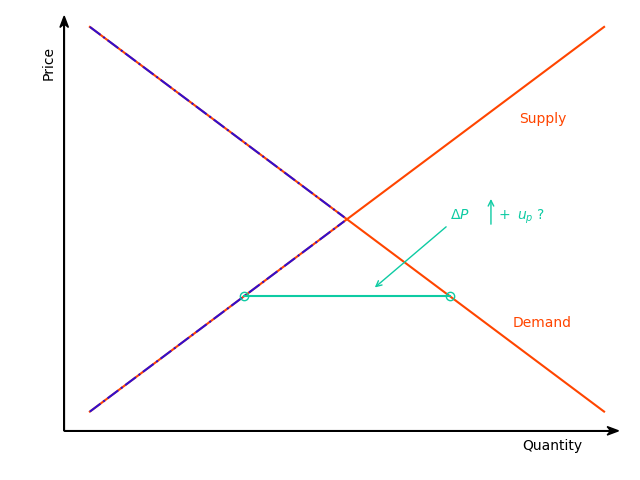 The released version of diseq can be installed from CRAN with:

The source code of the in-development version can be downloaded from GitHub.

After installing it, there is a basic-usage example installed with it. To see it type the command

Online documentation is available for both the released and in-development versions of the package. The documentation files can also be accessed in R by typing

An overview of the package’s functionality was presented in the session Trends, Markets, Models of the useR!2021 conference. The recording of the session, including the talk for this package, can be found in the video that follows. The presentation slides of the talk are also available here.

This is a basic example that illustrates how a model of the package can be estimated. The package is loaded in the standard way.

The example uses simulated data. The diseq package offers a function to simulate data from data generating processes that correspond to the models that the package provides.

Models are initialized by a constructor. In this example, a basic disequilibrium model is estimated. There are also other models available (see Design and functionality). The constructor sets the model’s parameters and performs the necessary initialization processes. The following variables specify this example’s parameterization.

The model is estimated with default options by a simple call. See the documentation of estimate for more details and options.

The results can be inspected in the usual fashion via summary.

The equilibrium model can be estimated either using two-stage least squares or full information maximum likelihood. The two methods are asymptotically equivalent. The class for which both of these estimation methods are implemented is

The package organizes these classes in a simple object oriented hierarchy. 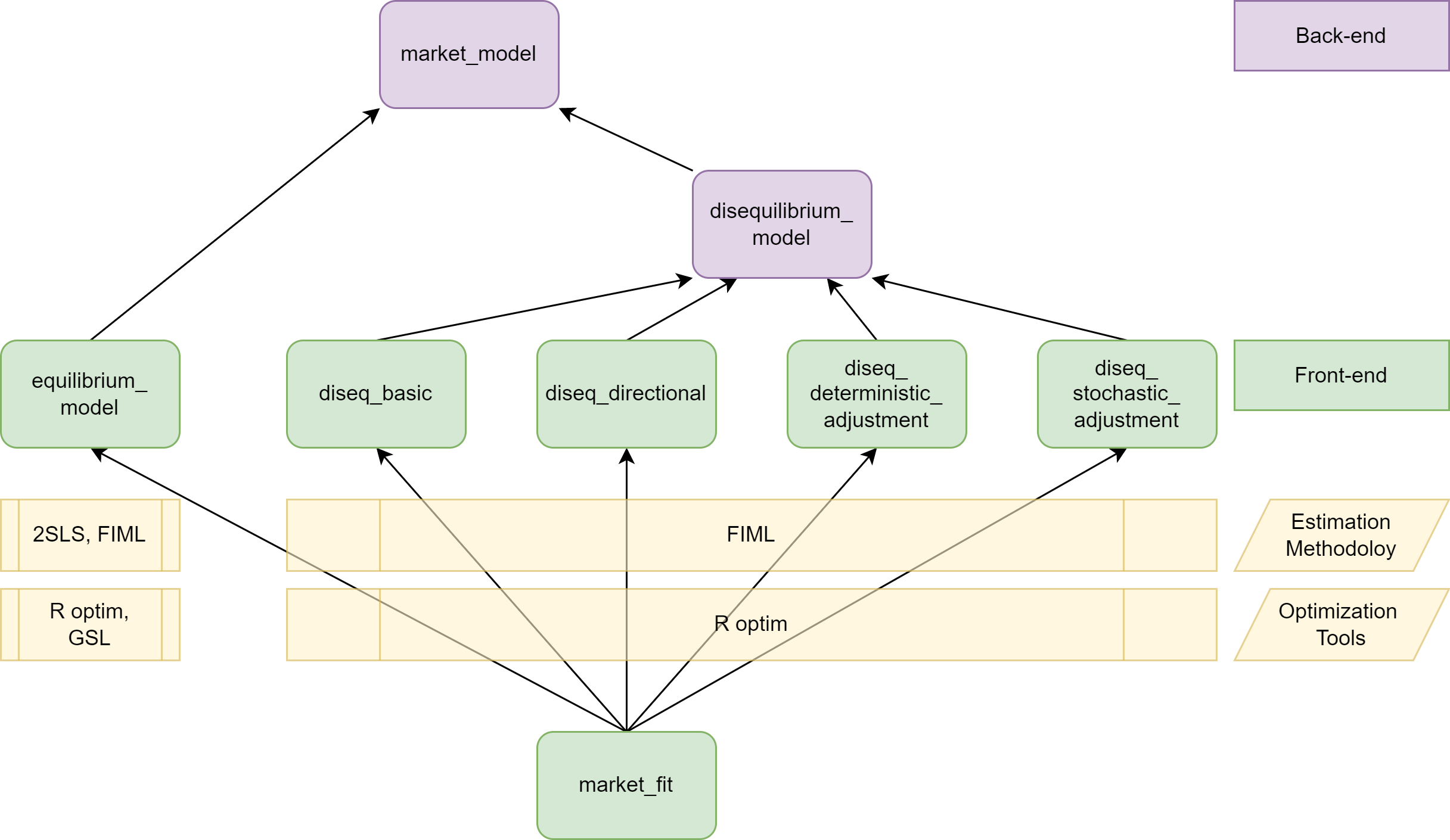 The estimation of the basic model is also supported by the package Disequilibrium. By default, the Disequilibrium package numerically approximates the gradient when optimizing the likelihood. In contrast, diseq uses analytically calculated expressions for the likelihood, which can reduce the duration of estimating the model. In addition, it allows the user to override this behavior and use the numerically approximated gradient. There is no alternative package that supports the out-of-the-box estimation of the other three disequilibrium models of diseq.

The package is planned to be expanded in the following ways:

The code is distributed under the MIT License.